Home › Opinion › WHY I BELIEVE YOU WHEN YOU SAY, “I WAS BORN GAY”

WHY I BELIEVE YOU WHEN YOU SAY, “I WAS BORN GAY”

I am a Christian minister. I preach regularly in a Christian church. I am in a seminary (Bible college) and have written a book on basic Christian doctrines. I host two podcasts that preach Jesus and reveal how Biblical principles apply to your everyday life. I believe with all my heart, soul and might in Jesus Christ, my Lord and Savior. I also believe you when you say, “I was born gay.”

Last week, I got into a heated discussion with a loved one. They asked me, “Are people born gay?” I said yes. They then fervently told me that God makes nothing “bad,” “perverse,” or “sinful.” Their conclusion was that for me to agree with a person who says, “I was born gay,” means that I affirm that God can make someone who is “defective,” thereby demeaning The Lord.

Certainly, sexual identity is a very complex reality of life in the 21st century. Yet Christian fundamentalists often oversimplify the intricacy of the issue of sexual identity, along with many other complicated issues in the modern world. Fundamentalists tend not to make a distinction between sin—a general phenomenon—and sins, those specific things that people do. What the Bible teaches is that everyone is born into sin (also known as “original sin”), and thus, we can’t help from doing all the bad stuff.

(And yes, it may seem unfair that because of the poor choice of one person long, long, ago that all have been counted guilty. However, the good news of Christ says that because of Him, there is an opportunity for redemption and reconciliation back to God. It also isn’t “fair” for God to have sacrificed Himself for all of us, but this is what the grace and love of God is all about.) 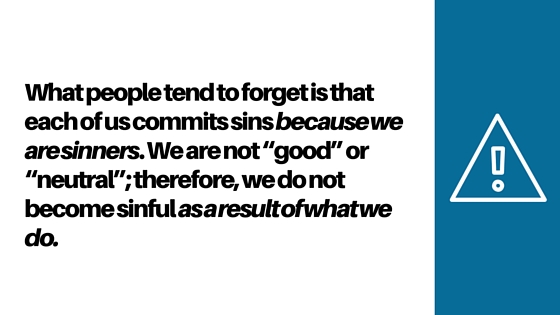 The Book of James (1:14-15) tells us that sin happens when evil tempts someone who is then carried away and enticed by their own lust or unique predilections. This is why John Doe may “get his kicks” by physically harming others, while Jane Q. Public may thoroughly “get her kicks” from committing theft. Theft doesn’t entice John Doe, and murder doesn’t entice Jane Q. Public. Imagine living in a sandwich shop that serves food, which always looks amazing, but with every bite you eat, slowly makes you sick. Everyone gets hungry, so everyone walks in and orders a sandwich. Sin is represented by the sandwich, and all people eat it. Different people like different types of sandwiches and condiments, but the fact remains that everyone eats. What John likes to eat (a steak sandwich with cheese and heavy mayo) doesn’t work for Jane (who likes the veggie wrap).

What Christian fundamentalists often fail to realize is that someone else’s liking for a sandwich has to be interpreted in the larger context of the much bigger problem: that everyone is in line at the sandwich shop, salivating over their next meal. Berating others in line won’t solve the bigger problem. Even if one group who prefers a particular type of sandwich disappears, the shop remains open. And, there will be some who say to someone else, “You chose to be here!” but that accusation comes from someone on the inside. In actuality, no one chose to come into the unhealthy sandwich shop—because they were born into it: no one was born “OK,” the direct result of original sin.

In fact, the idea that we are born “OK” and that it is our actions that make us bad, isn’t a new idea at all. Way back in the 5th century, a man by the name of Pelagius touted this idea, but orthodox Christianity has since labeled him a heretic. Pelagius began with the premise that God could not command us to do anything that we are incapable of executing. Thus, because of our “free will” we are morally responsible for our actions. This, of course, rejects what the Bible teaches us about original sin: that none are good by their own merit (Romans 3:10-11), and because of the original sin of Adam in the Garden of Eden, sin entered the world and infected everyone for all time (Romans 5:12).

Of course, if you follow Pelagius’s thinking, and declare that we are born “OK”—and that someone would choose to be gay sometime after birth—a frightening conclusion arises: since some can in fact choose the “right” path, there is no need for Jesus, no need for His sacrifice on the Cross, and no need for faith. So while some believers may have sincere intent in their subscription to the belief that we choose sin, they ought to fully consider how that understanding, when applied to God, drastically alters the terrain of Christianity. In short, this interpretation means that Jesus died in vain, dismantling the entire Christian faith.

What the great theologian Augustine would clarify is that God defines the contours of our human freedom. That freedom is shrunk with sin, and increased with Christ. 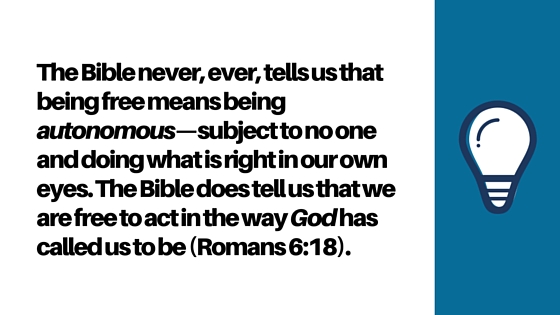 And, as it pertains to someone being “born gay,” I, as a heterosexual male, can’t credibly comment on whether or not someone who is homosexual was indeed “born gay.”

Which is exactly why I enjoyed the book, Is God Anti-Gay? by Sam Alberry so much. Alberry is a man who knows and follows Jesus. Alberry is also attracted to members of the same sex. Notably, in pursuit of Jesus and what God commands, Alberry recognizes that what the Bible says about homosexuality does not represent the whole message of Christianity. He writes:

“If someone thinks the gospel has somehow slotted into their life quite easily, without causing any major adjustments to their lifestyle or aspirations, it is likely that they have not really started following Jesus at all … [I]t is not true for those with [same-sex attraction] to say: “But God made me this way!” Our “nature” (as we experience it) is not natural (as God intended it). All of us have desires that are warped as a result of our fallen nature. Desires for things God has forbidden are a reflection of how sin has distorted me, not how God has made me” (Alberry, 2013).

Consequently, there is very large gap between the person we all were born as, and the person whom God has called us to be. God never made anyone defective, and the problem indeed is not our “nature.” The problem is that in order to ascertain how that “nature” should act, one cannot look on the inside to the creation, but must look outside to the Creator. So yes, we have all been born with certain predilections. The question we must now ask is, who defines whether or not those predilections are worth feeding?

Ultimately, when I engaged in the heated debate with a loved one, I took a step back from the conversation and realized that the danger in Christians fighting over the issue at hand is not that the conversation is happening. It is not that believers may have errors outside of a fundamental doctrine of the Christian faith. The real danger is that if we place so much emphasis on what specific people do, we will have missed the larger problem of why everyone does it in the first place. Sin is universal and sin is destructive. Sinners are all of us, but thankfully, Jesus did not come to save the righteous. He came for the sinners (Mark 2:17) and “to seek and to save that which was lost” (Luke 19:10).