Home › Opinion › TRANSFORM: HOW TO CHANGE WHEN CHANGE IS DIFFICULT: A FOCUSED BIBLE STUDY OF II KINGS 6:8-23

TRANSFORM: HOW TO CHANGE WHEN CHANGE IS DIFFICULT: A FOCUSED BIBLE STUDY OF II KINGS 6:8-23

God is capable of making big changes, and we are the instruments of that change. Yet, on the verge of transformational change, the task ahead may seem too large to overcome, sapping away precious motivation. 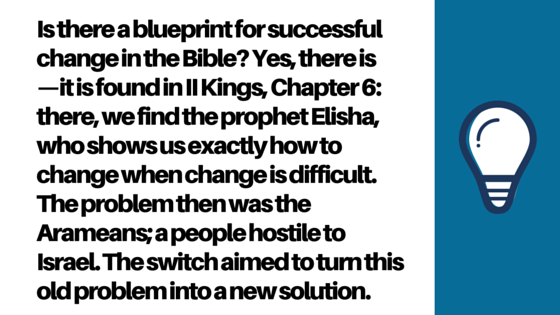 How to Change When Change is Difficult Strategy #1: Define Your Purpose With Specific Instructions

“Now the king of Aram was warring against Israel; and he counseled with his servants saying, “In such and such a place shall be my camp.” [Elisha] sent word to the king of Israel saying, “Beware that you do not pass this place, for the Arameans are coming down there.” The king of Israel sent to the place about which the man of God had told him; thus he warned him, so that he guarded himself there, more than once or twice” (II Kings 6:8-10).

To understand the above verses, one needs some background. At this point in Israel’s history, the people were in the Promised Land, but they continually faced obstacles from outside nations. In essence, once King Solomon passed away, Israel was never again at peace. The Arameans are discussed in II Kings 6, but they also make an appearance in II Kings 5. They are even mentioned in I Kings 19, and also in II Samuel (a book in the Bible before II Kings), where they caused King David problems. The point is that the Arameans represent that same old problem that has been incessantly nagging you for some time, but has not managed to hurt you permanently. The Arameans—for each of us—may be a person, a relationship, a way of life, or a situation. This something is well known, tolerated, and understood as the way things will be. (e.g., “Oh, that’s just the way he is.”) The Hebrew meaning of the word Arameans—or ‘the people from Aram’—illustrates this point. The word aram in Hebrew means ‘the highland,’ so Arameans means ‘people who live in a high place or citadel.’ Arameans can also mean exalted—hence that nagging problem that has been pestering you for decades actually has an esteemed position in your life—as in, “That’s just something too big for me to conquer.” Yes, you’re right. You can’t. God can.

Elisha initiated a switch; he gave the king of Israel specific directions, “Beware that you do not pass this place, for the Arameans are coming down there.” The Arameans could always cause a problem because they could initiate a sneak attack whenever they wanted to. Elisha, inspired by God, was able to provide the king of Israel intelligence before the event happened, so that the king would be ready. Therefore, Elisha provided clear direction to guide the king, with no allowance for wiggle room. Elisha told the king, “Go to that specific place at this specific time.” These instructions were not only specific, but also crucial, because transformation always causes trouble, and trouble requires a plan. That plan provides a script for the most important moves.

Take for example, New Year’s resolutions: most resolutions (about 90%) fail. Why? Because people do not give themselves clear and specific directions. They also do not make plans for the most important steps of that plan. For instance, a resolution to “eat healthier” is a terrible idea. Why? Because it’s not specific. No one can quantify “eating healthier” and “eating healthier” may mean consuming three sodas a day instead of six, versus someone else who might choose to eat four salads a day instead of two. A much better goal is to “lose five pounds by the 1st of February.” This is a great goal. It is specific, clear, and universally wiggle-proof. However, it doesn’t stop there. Just as Elisha scripted the important move for Israel’s king, you also have to script your most important moves. Therefore, if you’re going to lose five pounds, you have to ask yourself—if you did nothing else—what are the most essential things you must you do in order to achieve your goal? You realize that your critical moves are also what keep you fat: eating right before going to bed, and consuming too many carbohydrates daily. Thus, in your script, you define your purpose (to lose 5 pounds) with specific directions (by February 1) and script the important moves (no food within three hours of going to bed, and limiting your daily carbohydrate intake to 120 grams). Moreover, now that you have a clear plan and know what’s important, you don’t even have to go to the gym!

How to Change When Change is Difficult Strategy #2: Inspire the Heart by Sharing Your Vision

In verses 11-14, the Aramean king became upset that his sneak attack was foiled. He wondered which one of his men was a spy, but his men informed him that Elisha was so wise that he could hear things said even in secret. Therefore, the Aramean king wanted Elisha for himself, so he sent an army to Elisha’s hometown, Dothan.

“Now when the attendant of the man of God had risen early and gone out, behold, an army with horses and chariots was circling the city. And his servant said to him, “Alas, my master! What shall we do?” So he answered, “Do not fear, for those who are with us are more than those who are with them.” Then Elisha prayed and said, “O Lord, I pray, open his eyes that he may see.” And the Lord opened the servant’s eyes and he saw; and behold, the mountain was full of horses and chariots of fire all around Elisha. When they came down to him, Elisha prayed to the Lord and said, “Strike this people with blindness, I pray.” So He struck them with blindness according to the word of Elisha” (II Kings 6:15-18).

The question “What shall we do?” is an intriguing one, because it implies a simultaneous willingness to act with a hesitancy to move forward. The reason is fear, which is a natural human response. The servant did not know why the foreign soldiers were there, so he wisely looked to the man of God for guidance. Moreover—by the way—this is important in and of itself, for where you are getting your specific directions from (if it isn’t God’s word or doesn’t come from one of God’s prophets), it may lead you to some less-than-desirable places. Specific directions have value exclusively as a function of the source of the directions. So no, you shouldn’t get specific health advice by typing your problem into a Google search bar.

Elisha assuaged his servant’s fear by sharing his vision and inspiring his servant’s heart. He did that by comparing the problem in front of them to God: “So [Elisha] answered, ‘Do not fear, for those who are with us are more than those who are with them.” Then Elisha prayed and said, “O Lord, pray, open his eyes that he may see.” And the Lord opened the servant’s eyes and he saw; and behold, the mountain was full of horses and chariots of fire all around Elisha.”

How to Change When Change is Difficult Strategy #3: Show Others the New Way

“Then Elisha said to them, “This is not the way, nor is this the city; follow me and I will bring you to the man whom you seek.” And he brought them to Samaria. When they had come into Samaria, Elisha said, “O Lord, open the eyes of these men, that they may see.” So the Lord opened their eyes and they saw; and behold, they were in the midst of Samaria. Then the king of Israel when he saw them, said to Elisha, “My father, shall I kill them? Shall I kill them?” He answered, “You shall not kill them. Would you kill those you have taken captive with your sword and with your bow? Set bread and water before them, that they may eat and drink and go to their master.” So he prepared a great feast for them; and when they had eaten and drunk he sent them away, and they went to their master. And the marauding bands of Arameans did not come again into the land of Israel” (emphasis added; II Kings 6:19-23).

The last verse illustrates how the change was successful. Elisha showed others a new way by taking the Arameans to their enemy, but he didn’t bring them to the conclusion they expected. In fact, Elisha, the man with sight and vision, led those who couldn’t see down a brand new path. Moreover—on that path, because the way is a new one—new paths require new habits.

The king asked Elisha, “Shall I kill them?” twice. This is a Hebrew literary device that means although the king was asking, what he was really saying was, “I really want to kill them, so let’s get on with it.” However, because Elisha showed others the way, and installed new habits on the new path, he demonstrated unexpected grace—not expected judgment. The Arameans were brought before the king, and assumed that once he saw them, they’d be dead. They thought that after the wrong they had done, death would be the expected and deserved punishment. Nevertheless, Elisha chose a new course. Although they expected condemnation, he demonstrated grace and mercy by feeding them. In a similar way, when we are brought before God the Father, we may expect judgment and condemnation, but God looks to Jesus, remembering our sins no more. Now, we have a restored relationship with the King of Kings.

Yes, the Arameans represent that ‘same old problem’ but we must separate the act from the person. What the Arameans did historically (their sins) is what caused a problem that required transformation. So, the transformation mandated a change in behavior but not the destruction of the ones committing the sin. God hates sin, but He also does not wish for anyone to perish but for all to come to repentance (II Peter 3:9). Therefore, when a sinner is transformed into someone who is righteous, everyone wins.

How to change when change is difficult can often be more than difficult. It can seem impossible. Big change is never easy, but all big changes can be conquered with sequential small changes. The one thing to remember is that in the middle, change always looks like failure. Why? Because you’re figuring out how things should go, and calling audibles along the way. You encounter new challenges and have purpose and vision, but that purpose and vision has not materialized yet. If you looked up at Elisha on the mountain in Dothan, you would have said, “With all those Aramean chariots around him, he’s finished!” However, we know how the story ended. The road to transformational change always goes through sacrifice, through heartache, and through the seemingly impossible. Just ask Jesus. In the middle of His transformational change, He hung on a cross. They mocked Him. They ridiculed Him. They said, “You’re a bastard,” “You’re a failure,” and “You are not the Son of God.” Yes, while He hung on the cross, they laughed at Him. However, when He rose from the dead three days later, there was nothing left to laugh at, for He is risen. Therefore, just as Jesus rose to a fresh new possibility, so can you. Yes you can, and God will show you the way.