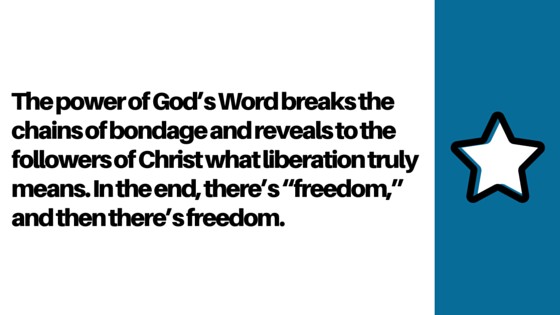 The Power of God’s Word I: Purpose

“About midnight Paul and Silas were praying and singing hymns to God, and the other prisoners were listening to them. Suddenly there was such a violent earthquake that the foundations of the prison were shaken. At once all the prison doors flew open, and everyone’s chains came loose. The jailer woke up, and when he saw the prison doors open, he drew his sword and was about to kill himself because he thought the prisoners had escaped. But Paul shouted, ‘Don’t harm yourself! We are all here!’ The jailer called for lights, rushed in and fell trembling before Paul and Silas. He then brought them out and asked, ‘Sirs, what must I do to be saved?’ They replied, ‘Believe in the Lord Jesus, and you will be saved—you and your household’ (Acts 16:25-31, NIV).

At this point in Acts 16, Paul and Silas find themselves in jail. They were stripped of their clothes and beaten and then had their feet put in the stocks, a form of torture. The reason why they were put in jail was not for anything illegal or heinous—they innocently helped a female slave who was demon-possessed by performing an exorcism. It just so happens that this demon had given the girl the gift of fortune-telling, and the girl’s unscrupulous masters had exploited this to gain a profit. When Paul healed the girl, the masters lost their economic livelihood. Subversively, instead of coming out and saying, “You’re hurting our pockets!” the slave’s masters stirred up a crowd and brought Paul and Silas before the authorities. They basically told the authorities that these men, who had a funny religion and a funny ethnicity (Jewish) and who come from a funny place (not Rome) were throwing their city into an uproar (Acts 16:16-24). This dynamic sounds eerily similar as it pertains to select marginal groups in America today.

Ironically, Paul set a girl free from the bondage of slavery, but her masters, who were allegedly “free,” were slaves to an economic system that would not allow the liberation of others to go unpunished. The girl’s owners were bound by the shackles of a mentality and an ideology that valued money over people. The owners were enslaved but didn’t realize they were slaves and fought ferociously to penalize liberators. In the end, there’s “freedom,” and then there’s freedom.

The power of God’s Word liberates people from the chains of circumstance.

So, Paul and Silas ended up in jail. While other prisoners in the jail were trying to sleep or were saddened by their circumstance, Paul and Silas “were praying and singing hymns to God.” The others prisoners could have reasonably asked the duo, “What the heck is wrong with the two of you? You are in jail. You are in chains. What possible reason could you have to sing funny songs to a funny God? What possible reason could you have to be happy?”

Paul and Silas would have responded to the men by saying, “My fellow brethren. You seem to be asking the wrong question. The real question is, ‘What reason do we have to be sad?’ You see, our circumstance does not control us. We may be in chains, but that doesn’t mean we are in bondage. We serve a God who is sovereign, and He rules over our circumstance. The situation is only for a short time, but God’s Word stands forever. The Lord is the One who has permissively allowed us to be in jail, and He is the One who will take us out. Therefore, we will not be dismayed, nor will we be downtrodden because the power of God’s Word liberates us from our circumstance. Because we are free in chains, we will do what free men do in times of adversity: praise the name of Yahweh, the Most High God.”

The power of God’s Word liberates people from the chains of false identity.

Some of the more stubborn prisoners still wouldn’t have “got it.” They would have said, “Listen, the two of you just need to stop. Look around: You are prisoners. You are in chains. You are not free; you are slaves. Act like it.”

Paul and Silas would have responded, “My dear brethren, we may be in prison, but we are not prisoners. We are bondservants of the Messiah. You can label us whatever you like, but our identity is not derived from our situation, nor is it derived from what other people call us. We know that before the foundation of the world, God foreknew us. We know that He predestined us, He called us, He justified us, and He will one day glorify us. We are chosen not because of our own merit, but because of the One who made us for His glory. We will never act like prisoners because we will never be prisoners. We will act like members of a royal priesthood who have been eternally set free by the One who already conquered sin and death, Jesus Christ.”

The power of God’s Word to liberate people from the chains of false identity is especially pertinent today because many people dwell in symbolic “jails.” Ironically, although a jail subjugates people, it also offers a sense of security and certainty. It gives the prisoners certainty in their social location, it gives the jailer certainty by giving him job security, and it gave Roman society security as a secure locale to “lock up the bad guys.” As long as everyone accepts their assigned false identity because of their relationship to the jail, then the oppressive system can continue.

In a similar way, in the 21st century, some people, for example, can accept the false identity of a “consumer” who must incessantly buy to keep up with the status quo. They accept the delusion that more options give them “freedom” but fail to consider where the plethora of options actually leads them. Freedom isn’t about the number of options you have; it is about where those options take you. In the end, there’s “freedom,” and then there’s freedom.

You can be a “free” consumer, for instance, and have the ability to choose from dozens of credit card offers in the mail. This “jail” of consumption leads you to believe that you have tremendous freedom because of choice without realizing that all of those options will keep you in economic bondage. The only way to be set free from the chains of this prison is to juxtapose the promises of so-called “freedom” with the promise of an eternal God. Will these other choices give you eternal life? Absolutely not. Only one option gives you that, and His name is Jesus Christ.

So when the thing that was supposed to impart safety and security goes up against an omnipotent God, what happens? “Suddenly there was such a violent earthquake that the foundations of the prison were shaken. At once all the prison doors flew open, and everyone’s chains came loose” (emphasis added; Acts 16:26). The foundation of the fraudulent ideology is exposed for the farce that it is. The core of the idea becomes exposed, and it reveals that it cannot stand the test of time. The power of God’s Word liberates people from the chains of false identity, temporal ideology, and the fallacy of choice.

The power of God’s Word liberates people from the chains of expectation.

Likely, the strongest argument to support the fact that Paul and Silas were always free is the fact that they didn’t go anywhere after the earthquake rocked the foundation of the jail and everyone’s chains came loose. They stayed inside, and when the jailer heard all the commotion and came into the building looking for prisoners, Paul and Silas were the ones who called out to him. The jailer expected all the men to be long gone. He expected to take his own life because he lived in a world where justice triumphed over mercy. He may have expected Paul and Silas to take an antagonistic attitude toward him. But, the power of God’s Word liberates people from the chains of expectations, and Paul and Silas showed the jailer what unexpected grace looks like.

The duo knew that the jailer had already come to terms with his inadequacy. With the threat of death, he said, “What must I do to be saved?” Had he been secure in his destiny, he wouldn’t have asked the question. The jailer was smart enough to interpret the supernatural events as more than mere happenstance and to interpret Paul and Silas as more than mere “prisoners.” The duo subsequently offered the jailer what he never expected: insight into a world without jails, without chains, and without subjugation. It is a world that defies expectations, where a loving God gave the free, merciful gift of His Son to humanity so that the elect could be reconciled back to the Father. In this world, one would expect that because of sin, we would have to endlessly labor in order to pay back the moral debt owed to God. But this same God defies expectations and has already done the heavy lifting. In this world, where God desires to liberate His followers, there is only one thing that we must do to break every chain: “Believe in the Lord Jesus, and you will be saved.”