Home › Opinion › THE LAMB OF GOD

THE LAMB OF GOD 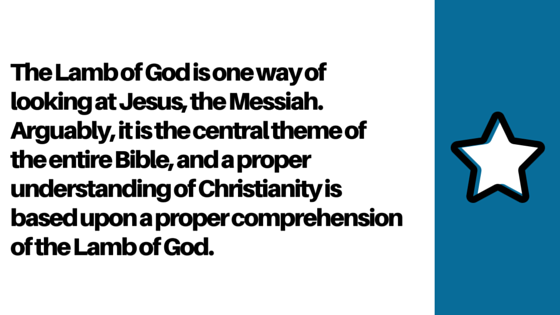 Jesus is the Lamb of God. Appreciating what this means equates to embracing one simple idea: substitution. That is, either you die or something else dies.

This is a basic concept that runs the course of the entire Bible. Every instance of substitution in the Old Testament points forward to the New Testament, where the final and ultimate substitution takes place with Jesus.

Without a proper understanding of the Lamb of God, the Bible devolves into a ludicrous, illogical mess of superstitious stories. Without an understanding of the lamb of God, the Bible doesn’t make any sense. Without an understanding of the lamb of God, all you are left with is a tale of a father attempting to murder his son (Abraham and Isaac, Genesis 22). Not only is that barbaric, but it also seems very pagan. You are left with a story of the blood of an animal appeasing the wrath of The Lord (The Passover, Exodus 12). That doesn’t make any sense. If God is almighty and all-powerful, then how could the blood of an innocent, little lamb possibly appease Him? That makes God seem very unlike God and more like a weak, bloodthirsty tyrant. You are left with the story of a Man called Jesus who “probably” did exist, but He just came to teach us about ethical living, being kind to one another, and acting with humility. Yes, He was crucified, but that’s because the Romans and the Jews felt threatened by Him. He wasn’t a sacrifice at all, because that just sounds too messy and brutal.

We begin to see the concept of substitution “in the beginning” with our first parents, Adam and Eve. After they violate God’s command not to eat the fruit of the tree of knowledge of good and evil, God graciously provides for them. God used a substitute, an innocent animal, in order to provide “garments of skin” (Genesis 3:21) for them. Although the Bible does not specify that the animal was a lamb, there had to be shedding of blood to produce the skins that now covered their nakedness and vulnerability. The substitutionary blood sacrifice served as a means to clothe and to protect Adam and Eve. Of course, God could have left them both alone to die, but He chose to care for them instead. Subsequently, this theme of substitution is deeply embedded into the rest of the Biblical narrative.

The lamb substitutes for one person.

In Genesis 22, God tests Abraham and commands him to sacrifice his son, Isaac. When Abraham arrives at the destination with his son, Isaac says, “Behold, the fire and the wood, but where is the lamb for the burnt offering?” Abraham replies, “God will provide for Himself the lamb for the burnt offering, my son” (emphasis added; verses 7-8). Foreshadowing Jesus, the lamb is something that God provides in order to substitute for those who need saving.

By this time, Abraham was very, very old. Isaac was young. Undoubtedly, the son could have overcome the physical strength of his aged father who held him down to be sacrificed. Yet, Isaac did not escape, and he submitted to the will of his father. There is a sense of the necessity of substitution and the need for atonement. But the fact remains, how could any father even think about sacrificing his son? Because Abraham didn’t think he was irrevocably killing his son. Abraham believed that God would raise his son from the dead (Hebrews 11:19). Abraham knew that He served a trustworthy God with Whom he had a relationship and had already made a covenant (Genesis 15:9-21 and 17). If this story is stripped away from the bigger story in the Biblical arc, of course it ceases to make sense. This story points forward to the Lamb of God, Jesus. The point of this story isn’t about Abraham sacrificing his son. It’s about God providing a substitute for those who demonstrate faith so that they don’t have to die. Either you die or something else dies.

“Then Abraham raised his eyes and looked, and behold, behind him a ram caught in the thicket by his horns; and Abraham went and took the ram and offered him up for a burnt offering in the place of his son. Abraham called the name of that place The Lord Will Provide, as it is said to this day, ‘In the mount of the Lord it will be provided’” (Genesis 22:13-14).

The lamb substitutes for a nation.

In the Passover narrative (Exodus 12), the Israelites are still in Egypt waiting to be freed from bondage. God is about to inflict the tenth and worst plague on the entire country, where all the firstborn males will die. That is, of course, unless an innocent male lamb without blemish is sacrificed and the blood of the lamb is placed on the doorposts and lintels (Exodus 12:7) of a household. God will pass over these houses, and hence the lamb substitutes for a nation (Israel).

So what does this story really mean? Is the Lord of the universe being thwarted by the blood of a simple animal? Does God get scared when he sees bloodstained doorposts and lintels? May it never be! God’s judgment is inescapable, and when His judgment comes, you cannot cover your own sins and your own guilt. Either you die or something else does. The lamb was the something else.

Furthermore, the Passover was a one-time event where the lamb served as a substitute once. It didn’t protect the people once they left Egypt, which is why the Israelites had to participate in sacrifices in order to atone for their sins. In this story, God was trying to tell the people that something else has to protect you, something else has to cover you, and something else must pay the penalty to satisfy God’s justice. And, as is always the case, who provided the blueprint on how to “get passed over”? God did (Exodus 12:1-13). Just as in the case of Abraham, He provided the way to endure His own judgment.

The Lamb of God substitutes for the world.

In Abraham’s case, the lamb substituted for one person. In Egypt, the lamb substituted for a nation. Then, in the New Testament, in John 1:29, John the Baptizer is on the banks of the river Jordan. He sees Jesus coming and then says, “Behold, the Lamb of God who takes away the sin of the world!” The substitution that was provided by prior “lambs” was always temporary and applied to particular groups of people. Jesus is the ultimate Passover lamb (I Corinthians 5:7) Who provided an eternally sufficient sacrificial substitution for the entire world. This explains why He had to die as a substitute for humanity: because if Jesus did not die, then we would have to.

Yes, the crucifixion was barbaric. Yes, the crucifixion was gruesome. Yes, the crucifixion superficially doesn’t seem to make any sense. It’s illogical. It’s something that God did not have to do. So why would God give up His only Son for the sake of humanity? The answer is love, which is not scientific. Love defies logic. Love is never formulaic or mechanistic. Love gives even when it’s hurt. For it was because God loved that He gave (John 3:16). The blood sacrifice on the Cross taken away from what it was designed to do—substitutionary atonement—makes the crucifixion meaningless. After all, plenty of other people were crucified, and that experience did not make them the Messiah. It was because of the perfect obedience of Jesus that He became the spotless Lamb of God who took away the sins of the world. And this only makes sense when one understands substitution and the Biblical premise that when it comes to paying the penalty for sin, either you die or something else dies.

In the beginning, when God spoke the world into existence, He already knew all of those who would spite and reject Him. Yet in spite of this, He still gave us a chance and provided a means of reconciliation back to Him through the Lamb of God. There is nothing that can make sense of this gracious act other than the steadfast love and kindness of The Lord.

“Now all these things are from God, who reconciled us to Himself through Christ and gave us the ministry of reconciliation, namely, that God was, in Christ, reconciling the world to Himself, not counting their trespasses against them, and He has committed to us the word of reconciliation” (II Corinthians 5:18-19).