Home › Medical › DO NO HARM: THE DANGERS OF MEDICAL RADIATION

DO NO HARM: THE DANGERS OF MEDICAL RADIATION

The dangers of medical radiation are real, yet often neglected in the delivery of medical care.

I have been a full-time practicing emergency department (ED) physician since 2008. During the said time, my practice has evolved in many ways, but one aspect in particular—the ordering of computed tomography (CT) scans in light of radiation risk—has evolved the most. The thing is many (not to say all) ED doctors can simply order CT scans because they can without even thinking about the risks associated with them, conscious that risk is not universal but progressive based on several variables. If you’re 95 years old getting a CT scan of the head, it really doesn’t amount to that big of a deal (after all, you’re 95). But if you’re an 11-year-old girl getting a CT scan of the abdomen and pelvis, you’re not only receiving a healthy dose of radiation, but you’re also having some very sensitive structures (i.e., ovaries) exposed.

There is a certain psychology of the patients coming into the ED: they just “want to make sure” or “want to be safe.” As a result, some patients come to the hospital specifically to have a CT scan because a negative test result will be the only thing to give them peace of mind. Studies have proven that patients underestimate the radiation doses of CT scans, and their cancer risk comprehension was also poor despite the fact that they are more confident when CT imaging is part of their medical evaluation.1

Before I dive into specifics, allow me to discuss some radiation basics.

Radiation is defined as the emission of energy from a source. As examples, the sun emits light, and the radiator in your living room emits heat. In addition to x-rays, UV light, and gamma rays, our own bodies are also a source of radiation because we all emit heat. So technically speaking, all radiation is not the stuff that turns us into the Incredible Hulk.

Just by living on planet Earth, we are all exposed to background radiation in everyday life. Accordingly, when making a connection between radiation exposure and cancer, we must talk about the type and the dose of radiation. Different types are more dangerous than others, and the higher either the acute dose or cumulative dose over time, the more dangerous it is.

A further distinction pertains to whether the radiation is ionizing or nonionizing. Ionizing radiation is a subcategory of high-energy radiation that has enough power to “ionize” molecules or force an electron off an atom. The three main sources of ionizing radiation are cosmic, man-made (the atom bomb), and medical (CT scans, for example).

Ionization is dangerous because our atoms like to hold on to all of their electrons—removing one (or a few) destabilizes our cells, causing chemical changes, and begins to cause problems. In particular, ionizing radiation has the potential to damage DNA (mutations), and malfunctioning DNA can, in turn, lead to cancer. The amount of damage to a cell is directly related to the amount of radiation it receives, whether in one big dose or in increments over time. In short, ionizing radiation is carcinogenic.

Nonionizing radiation is a subcategory of low-frequency radiation that does not have enough power to remove electrons and is not known to increase cancer risk.

Is there a safe limit on the amount of ionizing radiation one can be exposed to? Technically, no.

The International Commission on Radiological Protection (ICRP) and other radiation protection groups aim first to prevent acute exposure and then to limit chronic exposure to acceptable levels. This consensus is based on the fact that there is no “safe” level of radiation exposure since in theory, small amounts of ionizing radiation have a carcinogenic potential. The goal is ALARA, or to keep exposures as low as reasonably achievable.For a numerical limit, in the United States, radiation workers are capped at 50 mSv of exposure annually. The EPA recommends that annual exposure not exceed 1 mSv. Americans are exposed to six times this amount every year.

One should also keep in mind that cancer linked to radiation is also affected by the part of the body that is exposed—so getting a chest x-ray every day for one year will increase the likelihood of cancer in the chest, but not in the pelvis. Age is another factor because children are still growing and all their cells are maturing and rapidly dividing. Children, in general, are more sensitive to radiation than adults; children also live longer, giving them a larger window of time in which to develop problems associated with radiation exposure. Children’s reproductive organs are particularly sensitive. Hence, for the same imaging study for the same part of the body, the risk of developing a radiation-related cancer in children is potentially much higher than for an adult exposed to the same dose of radiation.

Of course, medicine aims to heal and not to injure, so there are many tools at the physician’s disposal to make a patient well, and these imaging studies are a part of that plan. The goal has always been to “do no harm.” That being said, there is always a risk associated with the benefit, and having multiple imaging studies multiple times can potentially expose a patient to a tremendous amount of ionizing radiation. Case in point, it’s a well-established fact that when using radiation therapy to treat a patient with cancer, they may develop a secondary cancer from the radiation therapy.

The table below demonstrates that for some studies (like an x-ray of the chest or an extremity), the radiation exposure is miniscule, whereas for a CT of the abdomen and the pelvis, the radiation exposure exceeds the total amount of radiation someone may expect to be exposed to over several years. The data may force some to reconsider CT scans in general when they’re thought of instead as their chest x-ray equivalent (recall that the average American is exposed to 3.1 mSv of natural ionizing background radiation annually). 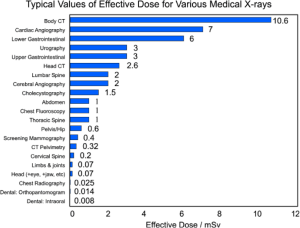 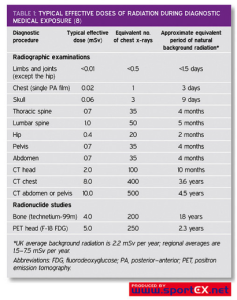 The US Food and Drug Administration (FDA) estimates that exposure to 10 mSv of radiation from an imaging test would increase the risk of death from cancer by about 1 chance in 2,000.

Shockingly, only a small minority (9%) of ED physicians are aware of the increased total lifetime risk of CT scans,6 and even more disturbing is that most emergency physicians (51%) have been shown to underestimate the actual radiation dosage by at least a factor of 10, equating one CT scan of the abdomen with the equivalent radiation of 10 chest radiographs or less and not with 100 or greater. In the same study, only 7% of patients were informed of the risks and benefits of the CT scan.7

Before the reader leaves with a totally negative picture of CT scans, keep in mind that it still remains a powerful tool in the diagnosis, management, and treatment for patients in the ED. For example, in the good old days, surgeons had to rely on a history and physical exam to evaluate patients with possible appendicitis. With the advent of CT, the negative laparotomy (the surgery looking for an inflamed appendix) rate has dropped from 20% to 4% or less.8 In the case of head trauma and stroke, CT imaging is an invaluable tool to evaluate for intracranial bleeding or infarction, cutting down the time to neurosurgical intervention and “guesswork” with a patient who has either a serious head injury or signs of a stroke. Because CT also allows the ED to make a diagnosis much faster, it has dramatically reduced hospital admissions, particularly admissions to the ICU, the costliest level of hospital care.9

Accordingly, the catch-22 is as follows: to avoid the misdiagnosis of a serious disorder, a low threshold for ordering CT scans must exist, cognizant of the elevated radiation risk involved. Conversely, if the threshold for ordering CT scans is too high, serious pathologies will be missed, at the benefit of no extra radiation exposure. In the end, if a patient is coming into the emergency department, all ED physicians assume that he or she must have a life-threatening emergency and will act accordingly.

In an ideal world, all ED physicians would not order CT scans frivolously and would consider the potential radiation exposure to patients, especially in children. Certainly, any rule or measure that takes clinical decision-making power away from the clinician is bogus. Even more, with the high legal liability associated with practicing emergency medicine, the physicians are under tremendous pressure “not to miss anything,” thus putting them between a rock and a hard place.

To the ED physicians: CT is a great benefit and should not be withheld in emergencies, but it can also pose substantial harm to the patient’s long-term health. Extreme care should be taken in the case of all children. We should all have a fundamental understanding of the radiation exposure involved in CT imaging, and, when possible, inform our patients of the said risk.

To the patients: CT imaging can be a life-saving tool, but it should not be viewed as the “magic pill.” Listen to your physician and avoid specifically seeking these studies out for the sake of having them, especially in your children. The scans may be painless and quick, but they also pose a palpable long-term risk that you should consider before receiving one.

To all: there’s no magic formulation for utilization, but perhaps, we can both have an intelligent and informed discussion about patient care, long-term health, and the need for an acute diagnosis.

The debate is far from over, but I do realize that the price of peace is going up for both doctors and patients.

8 comments on “DO NO HARM: THE DANGERS OF MEDICAL RADIATION”