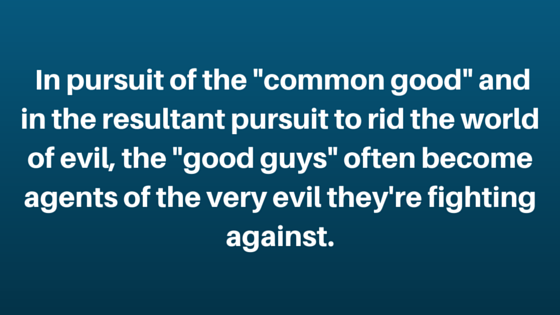 Knowledge has little value if it is not disseminated. After all, great ideas exist because they are widely known and appreciated, not held privately. Yet, knowledge and personal preference are often subversively mixed—because those who have understanding often inject partiality into their message. In such cases, the objectivity of an idea is tainted by the subjectivity of the messenger. This dynamic is particularly prevalent in the contemporary Christian church where many congregants do not read the Bible for themselves, but instead rely on a preacher to read and interpret the Scriptures for them. Hence, it is within this mixing area of knowledge and preference where many problems arise.

For example, in a recent speech to the U.S. Congress, Pope Francis used moral relativism in order to steer the entire listening audience in a particular direction. The question is not whether the pope had any good, objective ideas; the question is whether partiality, as a function of power, was injected into the message—and therefore transformed knowledge, largely concerned with awareness, into preference, which is largely concerned with exact prescriptions for behavior.

In his speech, the pope said:

“A political society endures when it seeks, as a vocation, to satisfy common needs by stimulating the growth of all its members, especially those in situations of greater vulnerability or risk. Legislative activity is always based on care for the people. To this you have been invited, called and convened by those who elected you.

Yours is a work which makes me reflect in two ways on the figure of Moses. On the one hand, the patriarch and lawgiver of the people of Israel symbolizes the need of peoples to keep alive their sense of unity by means of just legislation. On the other, the figure of Moses leads us directly to God and thus to the transcendent dignity of the human being. Moses provides us with a good synthesis of your work: you are asked to protect, by means of the law, the image and likeness fashioned by God on every human face … Our response must instead be one of hope and healing, of peace and justice. We are asked to summon the courage and the intelligence to resolve today’s many geopolitical and economic crises … We must move forward together, as one, in a renewed spirit of fraternity and solidarity, cooperating generously for the common good” (emphasis added).

Cooperating for the common good is not inherently a bad thing, nor is uniting in order to resolve geopolitical and economic crises.

The problem is that whenever any entity in the history of humankind has sought a “common good” this has invariably brought uncommon and adverse consequences.

Why? Because with billions of people on the planet and more than 300 million people living in this country alone, any pursuit that seeks an end in the interest of a common good will invariably crush and subjugate those who do not support the majority opinion.

Whenever an entity is confident of its own innocence and convinced of the iniquity of others, it claims the recalcitrant right to pursue the common good. Yet in pursuit of that good, and in the resultant pursuit to exterminate evil, it ironically often becomes an instrument of malice.

Good is never common, because what’s good for one may be bad for another. Good is never common because this implies harmony, and politics is never harmonious, particularly in a pluralistic society like that of the United States. Just as it is impossible to legislate morality, it is equally impossible to legislatively prescribe what is good—the former suggests my morals are inadequate, and the latter belittles my autonomy as a human being. Both are undergirded by the arrogance of the prescriber.

The pope, in seeking a common good, encourages the use of politics to achieve his desired end. Yet, politics is the mortal enemy of the common good. Moreover, Christian politics is one of the greatest enemies of the common good, because its incessant ‘busybody-ness’ is fueled by a sense of divine calling and the “welfare” of the “disadvantaged” recipients of its authoritarianism are masked in piety and righteousness. All Christians are free to love God and do as they please, but the second they venture into politics is when they begin to taint their supernatural core beliefs with political ideologies that—at best—can only achieve marginal, natural victories.

In 2015, we live in a world of “God and” such as “God and rock and roll,” “God and politics,” or “God and pluralism.” The second you begin to fill in the blank after and means that you think God by himself is inadequate. My advice is to kill the and. The single focal point of the Bible is to serve as a witness to Jesus. The single focal point of the church is Jesus. No and … just Jesus.

Politics is incapable of saving anyone, yet that still doesn’t stop some in positions of leadership in the Church from making political suggestions. No matter who adds the and, the fact remains that the and doesn’t purify the political message, but it does pollute God’s message.

Hence, anything within the realm of politics—even those admirable pursuits for the common good, whether it be social reform, environmental responsibility, or racial inclusiveness—is not what Christ’s central mission statement aims to do. Jesus already told us why He came: “To seek and save those who are lost” (Luke 19:10) and “to call sinners to repentance” (Luke 5:32). Accordingly, as M. R. DeHaan states, “The true church preaches regeneration—not reformation, not education, not legislation, but regeneration.”* In fact, a person is perfectly capable of reforming, educating, and legislating without God. If you reform a sinner, educate a sinner, or legislate a sinner, you are still left with a sinner. They haven’t met Jesus—the only one who can save them. Politics and chasing after the common good divert our attention away from the only thing that can do way better than the common good: salvation.

This is in no way, shape or form meant to demean or belittle the efforts of others who, through their dignified works, demonstrate the love and light of Christ to their neighbors. It is also not meant to disparage the pope, who expressed some reasonable sentiments in his speech to the U.S. Congress. It is meant for all of us to ponder the following: Christ came into this world to seek and save those who are lost. If, then, we are to be imitators of God (I Corinthians 11:1; Ephesians 5:1-2) and bring those who are lost so that they can be “found” and reconciled to God through the Messiah, of what gain is it to them if they receive a temporal, earthy benefit and not gain the gift of God that is everlasting—eternal life?

When Jesus recruited his team of disciples, he kept things “weird” and seemingly awkward. Matthew, for example, was a Jew and a tax collector. This meant that he was well-ingrained in the corrupt Roman tax system built upon dishonesty and the common good of the elite. Tax collectors back then were regarded with much disdain. Tax collectors supported the “statist” position that gave the Roman government political power to take from the people. Simon, on the other hand, was a zealot, which meant he hated the Roman government and wanted to overthrow them in favor of a sovereign Jewish state. This was a very anarchistic or “libertarian” political position that sought the removal of the current regime. Jesus, however, spent almost no time in the entire New Testament lecturing either Matthew or Simon on what the “appropriate” political orientation should be. Instead, what did our Lord and Savior do? He recruited them both. He recruited the corrupt government pawn and the revolutionary firebrand. Why? Because Jesus did not come to preach politics, He came to reconcile humanity back to God and to save sinners. Jesus is the light (John 8:12), and Christians are to be the lights of the world (Matthew 5:14-16).

So, as long as God’s truth is your guiding light, it really doesn’t matter where your ideological affiliations lie—as long as you don’t forget that the real common good is not an idea or a political platform, but a Person. He is the common good that transcends “hope and healing … peace and justice.”