STATISTICAL SENSATIONALISM IN THE MEDIA

We live in a time when many hazardous things happen on a daily basis, ranging from the accustomed and banal (paper cuts) to the dramatic and lethal (the Boston marathon bombings). Instances such as the latter are truly horrific and we all collectively mourn for the innocent people who lost their lives and were hurt in these unfortunate circumstances.

Keeping this in mind, it goes without saying that sensationalism in the the media has a particular liking for certain tragedies in our society, while selectively ignoring or downplaying others. A plane crash, for instance, always sticks out in our minds and the drama involved in the calamity prevents us from forgetting such adverse circumstances. However, I often ask myself what is the true likelihood for such dramatic events to happen and, despite all the sensationalism, where are the most common dangers in our everyday lives? After all, if we as a society begin to alter our behavior or relinquish our rights, based on statistical rarities and mathematical improbabilities do we all not then begin to walk along the downward spiral toward bondage?

How likely are we to die from a particular cause? The following graphic is from The National Safety Council (2008 data) and reveals the lifetime risk of dying from various causes (click the picture to expand for greater clarity): 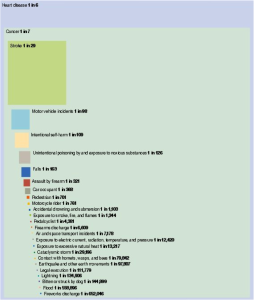 Heart disease is the biggest threat to everyone, everywhere in the United States. However, considering only external causes of death, getting behind the wheel of a motor vehicle is the most life-threatening activity most that people do everyday (unless you jump out of planes with dynamite for a living).

Based on 2011 data, 92% of all deaths (2.5 million people) were the result of internal causes (disease) and the remaining 8% were the result of external causes including accidents. Essentially, problems inside our bodies are far more likely to kill us than anything outside our bodies.1 Of that 2.5 million, 851 people (0.03%) died from unintentional firearm accidents. 19,766 people (0.79%) died as a result of intentional self-harm and 11,101 people (0.44%) died from firearm assault (and, by the way, of those killed by gunfire, 75% had a prior criminal history). In the same year, 34,677 people (1.38%) died from motor vehicle accidents. Surprisingly, if you have a gun, you’re more likely to die by killing yourself with your own gun than from being shot by another person. Moreover, it is more likely that a person will die from drowning than from being killed by a firearm, making residential swimming pools more of a threat (based on the stats) to human life than having a gun in your home. The economist Steven Levitt is quoted as saying, “There is a child killed by a gun for every one million plus guns … [but] yearly there is one drowning of a child for every 11,000 residential swimming pools.”

Guns therefore account for about 1.5% of all deaths in this country. If having legal firearms irritates some people, then relative to other causes of mortality, shouldn’t we as a society seriously consider banning anything that causes more death than guns? How about banning all cars? How about all cigarettes (risk factor for heart disease)? Swimming pools? What about banning all roads, since they “assist” the death machines, aka motor vehicles? We could also try to ban water in all bodies of—um—water, since people don’t drown people, water does. If all firearms are all banned, then what happens to all the old guns still in circulation that were acquired in full accordance with the law and never used to harm anyone? If your family was in danger and you were about to become a statistic, being threatened at gunpoint by a person who acquired a gun illegally, would you rather bring a knife or your own shotgun to that gunfight?

Here’s another dilemma: terrorism is even less lethal than guns. The State Department reports that 17 U.S. citizens were killed worldwide as a result of terrorism in 2011. That equates to 0.0007% of all deaths that year for an odds ratio of about 1 in 85,000. Bearing this in mind, and reviewing the latest CDC data (2011), it is revealed that the following are much more likely to kill us than a terrorist attack: a plane crash, obesity, electrocution, bodies of water (drowning), falling, medical errors, prescription drugs, starving to death, excessive heat and cancer. We’re actually more likely to be killed by one of our own homegrown police officers than from a terror attack (155 Americas killed by police officers in 2011). The 2011 Report on Terrorism from the National Counter Terrorism Center notes that Americans are just as likely to be “crushed to death by their televisions or furniture each year” as they are to be killed by terrorists.2

No one is downplaying the horrific events in our nation’s past and all the innocent lives that have been lost. To the victims’ families, the horrors and tragedy amounts to much more than numbers and statistics. What we all should not lose sight of, despite the grand scale of such events, is how likely they are to eliminate the typical American citizen. The bottom line is this: once we begin to live in fear and mold our society based on the least likely (but yet highly sensationalized) things to happen, the inevitable result is the gradual renunciation of all of our liberties, until we live in a society where nobody has the right to do anything.

Acts of terror are clearly despicable and wrong, but why is someone who detonates a bomb to kill innocents during a marathon in Boston worse then killing innocents in the Yemeni backlands with a drone? The same question applies to Pakistan and Afghanistan. Is it “terroristic” or “patriotic” for a nation’s leader to have a “kill list” which includes citizens of that leader’s own country? Innocent people being killed is always wrong, no matter the intent—so whether you’re talking about the crusades (both sides), the holocaust, the transatlantic slave trade, or coercive sanctions, the end result is always abominable.

Terrorism is a self-perpetuating cycle, where violence begets violence in a never-ending cycle of retribution, pain, war and destruction. Terrorists attack a country for the exact same reasons that a nation attacks another—to make the other side do what the aggressor wants.

Furthermore, the “war on terror” is fought against a shapeless, formless, and invisible enemy, so even when an army does start attacking in response, no one will know whom exactly is getting harmed. Anybody can thus be a potential perpetrator and any country can be made a target, but most people around the world do not hold any grudges, for example, against the non-aggressive governments of St. Lucia and Tahiti.

We should all stop and consider the grand domino effect: a small, minute and (relatively) cheap act of violence can cause the offended nation to spend trillions of dollars on a series of wars (Iraq and Afghanistan), leaving those nations spiteful and resentful of the foreign intervention, thus fueling more hatred and disdain (blowback). The “terrorized” nation then strips its own innocent citizens of their privacy and rights in the interest of “national security”. It’s like blowing out your birthday candles and the end result being a magnitude 10.0 earthquake. The United States has certainly been wounded, but our hurt has then caused us to inflict more damage on ourselves—which is exactly why law-abiding citizens can’t get on a plane without getting barefoot first. The government even has a name for this phenomenon, called a “force multiplier”.

If bombing the whole world into oblivion in order to being peace really worked then mankind should have been living in paradise decades ago. Alas, once we realize that any super-aggressor is partly responsible for all the blowback that it causes, we can only then begin to realize that violence can never beget peace, and even if it does, it will be peace covered in a sheet of pristine white, with an angry, violent, and vile wolf underneath with a gun loaded and ready, teeth clenched, waiting for the right moment to strike.

7 comments on “STATISTICAL SENSATIONALISM IN THE MEDIA”