Home › Current Events › WHY THE FUTURE IS MORE IMPORTANT THAN THE PRESENT: ON THE PARIS ATTACKS, THE SYRIAN REFUGEES & PROVIDENCE

WHY THE FUTURE IS MORE IMPORTANT THAN THE PRESENT: ON THE PARIS ATTACKS, THE SYRIAN REFUGEES & PROVIDENCE 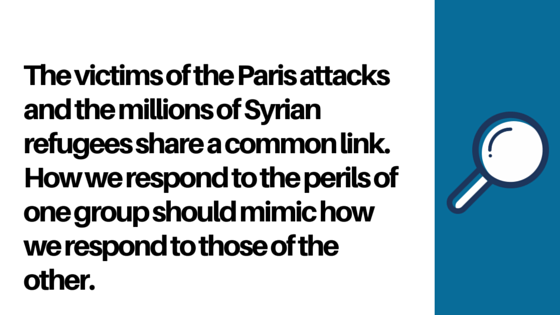 The French people have been struck by tragedy. The Islamic State claimed responsibility for the recent catastrophic attacks on the French capital that claimed the lives of more than 120 individuals. As the NY Times reports, ISIS has called the attacks “the first of the storm” and degraded the city of Paris as a “‘capital of prostitution and obscenity,’ according to statements released in multiple languages on one of the terror group’s encrypted messaging accounts.” Using an acronym for the Islamic State (Daesh), the French President, François Hollande, placed blame for the attacks on the terror group. In regards to the attacks, he said, “It is an act of war that was committed by a terrorist army, a jihadist army, Daesh, against France.” Current intelligence suggests that Abdelhamid Abaaoud, a migrant from Syria to Belgium, was the mastermind behind the Paris attacks. Most of those alleged to have perpetrated the attacks have been identified as nationals of France.

At this critical juncture in time, emotions run deep, and there is a common grief shared with others due to the senseless loss of life and the wanton use of mindless violence. Yet, fully cognizant of this fact, the world has unfortunately seen such terror before, and the question we must now ask ourselves is how we ought to respond. Almost 15 years ago, in the aftermath of 9/11, America was in a situation similar to that in France right now. Former President Bush made the statement, “We’re taking the fight to the terrorists abroad, so we don’t have to face them here at home.” In essence, that meant sending people to kill so those targets don’t come over here to kill. This strategy did not work, as the interventions to thwart Al-Qaeda helped to build ISIS, which was succinctly summed up by a college student when she told former Governor Jeb Bush, “Your brother created ISIS.”

Sadly, if we are to respond as we have in the past, then it seems that our actions may portend an escalation of terrorism as opposed to the containment of it. In response to the attacks of September 11, 2001, America engaged in two land wars and multiple proxy wars. And what quantifiable results have all those wars had? Today, in 2015, there is more terrorism in the world in addition to a five-fold increase in terrorism fatalities. Moreover, the Middle East—the area where the United States engaged in two land wars—is more unstable than it was in 2000. This must be considered in the context of President Hollande promising that France would act, in regard to ISIS, without mercy and “unforgiving with the barbarians.”

As Ed Krayewski writes for Reason: “ISIS replaced Al Qaeda, weakened but not finished by fourteen years of American counterterrorist operations. By almost every measure, it is a more vicious organization even than Al Qaeda. This is not a new phenomenon—it is a well-known pattern wherever drug cartels and other crime lords (and what is a terrorist but that?) are knocked off. They are replaced by something more vicious.”

Abdelhamid Abaaoud entered Europe from Syria through Greece. This fact has given rise to acute anxiety over people emigrating from the Middle East, both in Europe and in America. Many American governors have voiced their opposition to having Syrian refugees in their states. (More than 25 governors have in fact expressed this sentiment.) The aversion to refugees is in fact a very big deal because the crisis in Syria has produced more than four million refugees. A majority of them are now located in government camps near the Turkish-Syrian border. Yet, although many have adopted an antagonistic attitude toward the refugees since the Paris attacks, both the refugees and the Parisian victims share a common link—both groups had their livelihood and personhood irreversibly changed by an external and coercive threat that sought its own limited purposes at the expense of the innocent. Hence, President Assad of Syria sought his own limited purposes, leading to civil war. The international community sought its own purposes in contributing military resources in the Syrian conflict, leading to four million refugees. Terrorists sought their own limited purposes, leading to the death of innocent Parisians. If we now seek our own limited purposes in our response to these crises, then the cycle continues without hope and without end.

Consequently, our response to the Syrian refugees should mimic our response to the victims of the Paris attacks. Both are victims of abominable evil, and both would have preferred to live their lives peacefully. This peace was disrupted by violence, and for both groups, what will serve them best is not judgment or scorn, but mercy. 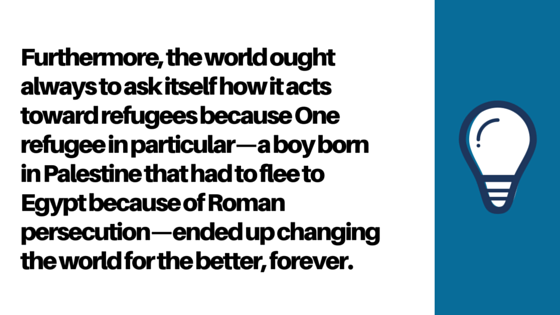 This brings me to my closing point, the issue of providence. In a natural sense, providence refers to an entity intervening in the present to execute protective care while planning and preparing for future eventualities. Accordingly, a natural human response to the Paris attacks is to take quick, “decisive” action, therein assuaging the need for vengeance by exterminating the “barbarians.” As the argument goes, this would control the terrorists in the present and protect the innocent and thus prepare against future eventualities. This sentiment was recently expressed by CNN reporter Jim Acosta when, in reference to ISIS, he asked President Obama, “Why can’t we take out these bastards?” In the President’s calculated response, he said:

“[ISIS] is not, as I said, a traditional military opponent. We can retake territory. And as long as we leave our troops there, we can hold it, but that does not solve the underlying problem of eliminating the dynamics that are producing these kinds of violent extremist groups. And so we are going to continue to pursue the strategy that has the best chance of working even though it does not offer the satisfaction, I guess, of a neat headline or an immediate resolution. And part of the reason, as I said, Jim, is because there are costs to the other side. I just want to remind people. This is not an abstraction. When we send troops in, those troops get injured, they get killed, they’re away from their families. Our country spends hundreds of billions of dollars. And so given the fact that there are enormous sacrifices involved in any military action, it’s best that we don’t, you know, shoot first and aim later. It’s important for us to get the strategy right and the strategy that we are pursuing is the right one.”

Providence protects in the present while preparing for what lies ahead. If we, as a nation, or as a collective group of nations, begin to take swift, military action, we will indeed achieve some success in taking out these “bastards.” But that would not be preparing for future eventualities. That would be creating new, larger, more dangerous eventualities that can hurt us worse than it has hurt humanity up to this point. War is never without cost, and part of that cost is blowback: the victimization of the innocent, who thus are given reason and moral impetus to attack the victimizers. People often ask why there is so much evil in the world, and one of the answers is quite simple: because we all, as fallible human beings, would rather satisfy our desires with quick vengeance as opposed to patient providence. As the wars in Iraq and Afghanistan have taught us, quick vengeance will generate some snappy headlines and rapid results, but this comes at the expense of long-term peace and harmony among human beings. If we do act quickly and swiftly, then we will be fighting violence with violence, using evil in the name of good, and choosing judgment over mercy. It is mercy that always triumphs over judgment.