ON THE MINIMUM WAGE 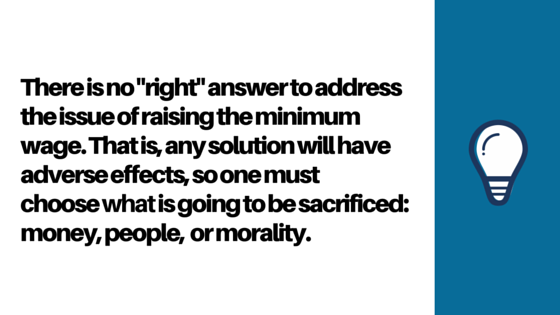 The federal minimum wage is currently $7.25 per hour. President Obama, in his 2014 State of the Union address, called for this wage to be increased to $10.10 per hour. The rationale is that increasing the minimum wage will benefit workers, lift people out of poverty, boost the economy through increased spending, and correct the diminishing value of the current minimum wage by adjusting for inflation. On a federal level, efforts to raise the minimum wage have stalled, but such efforts have progressed in many states (e.g., Vermont at $10.50 an hour by 2018 and Connecticut at $10.10 an hour by 2017) and municipalities (e.g., Seattle at $15 an hour rolled in over time and Los Angeles at $15 an hour by 2020). In some instances, local groups have taken even bolder steps. The Micah Institute, for example, launched the Real Living Wage NYC Campaign this month that seeks to secure $20 per hour for all New York City workers. This figure is not arbitrary, but is the wage required to meet basic needs without government subsidies in Manhattan. MIT has calculated that a genuine “living wage” for an individual living in New York City is $14.30 per hour.

A wide range of opinions exists on tinkering with the minimum wage, as does a lack of consensus about the overall effects of an increase in the figure. Moreover, politics, as usual, tends to taint the facts with agenda-serving biases, so it is very difficult to obtain an objective analysis on whether raising the minimum wage is in fact helpful or harmful.

The point that I hope to convey is that any way you go, someone is going to lose something in the minimum wage fight—it’s just a matter of what they loose and how much. What one chooses to do thus becomes a matter of what variable holds the most weight in their economic equation: profit, workers, or ethics.

On the one hand, full-time employment of 2,080 hours a year at the current federal minimum of $7.25 an hour yields an income of $14,500 a year. This amount is above the individual annual income poverty threshold of $11,770 but below the poverty line of $15,930 for one adult supporting one child. Essentially, what the federal government is saying is that it has set the floor on what an employer can legally pay an employee while also recognizing that the same floor places that employee either just above or well under the threshold of destitution. Living in one of the boroughs of New York City, I am wholly incapable of imagining how a full-time minimum wage worker making $290 a week is able to survive. Honest work deserves honest pay, and $7.25 an hour is nowhere near honest. Even if a $15 an hour minimum wage was federally enacted, a full-time worker would still be making $31,200 a year, a figure significantly below the median 2013 U.S. annual household income of $52,250.

The point is that the government may be “handing out” a bigger slice of the pie, but the minimum wage worker’s slice will still be small relative to everyone else’s.

Beyond quantitative variables such as supply and demand, there are also qualitative ones such as the nature and quality of the work. For example, it may be fair to reimburse a fast-food worker a lower wage if high turnover exists (it does), or if their job requires no comprehensive expertise or unique skills. It may not be fair, however, to reimburse a healthcare support worker the same minimum wage who in fact does have comprehensive expertise or unique skills.

Then, of course, one also has to contemplate that if an employer is coerced to pay his or her employees more money to do the same work, the employer may consider the termination of some workers, raising prices, or automating jobs. For instance, in a study completed this year by researchers at Purdue University, investigators found that raising the minimum wage to $15 an hour for limited-service restaurant employees (fast-food workers) “would lead to an estimated 4.3 percent increase in prices at those restaurants … increasing wages to $22 an hour, which the Bureau of Labor Statistics says is what the average American private industry employee makes, would cause a 25 percent increase in prices.” Researchers also found that employers had the option of reducing product size to compensate for higher wages. In the case of Seattle raising its minimum wage in April of this year, some evidence suggests that increased labor costs have contributed to a loss of jobs exclusively in the food-service industry. It must be mentioned that in this case causal evidence does not exist—for now, the two phenomena are noted to be coincidental.

The prior two examples have to be taken with a grain of salt because they look at very isolated cases that cannot necessarily be applied nationwide. This is, in fact, the case with many analyses on the effects of minimum wage that choose very small and select population segments to extrapolate their conclusions. In one of the more exhaustive and recent analyses of more than 200 papers, Belman and Wolfson conclude the following in What Does the Minimum Wage Do?:

In other words, if you increase the minimum wage slightly, people get more money (obviously) and there is almost no effect on how much or if those people work. The data does not predict a clear, empirical conclusion for large raises in the minimum wage, but if the goal is to subsidize people out of poverty, the issue is much larger than minimum wage.

In seeking to identify solutions to the problem, one must first acknowledge three important realities. First, within each state, all minimum wage workers may have an hourly pay rate in common, but the entities who pay them that rate are markedly different. Hence, forcing an employer that happens to be a multi-billion dollar, multi-national corporation to pay its employees more may not put too big of a dent in their bottom line. The situation is completely different if you’re a local business with a handful of workers and barely enough financial resources to make each pay cycle. And if one of the aims of raising the minimum wage is to boost the economy, it makes logical sense that this step should not crush some vital components of that economy (the insolvent small business owners). The economists and mathematicians can calculate a specific cutoff, but a loose rule should be that if any federal coercion is going to take place, it should not apply to businesses with less than a certain number of employees.

So when we talk about minimum wage workers, the group we are talking about the most, statistically, is comprised of teenagers who work part-time, not mature adults whose career is in a minimum wage field.

The third point is that ultimately, federal minimum wage legislation coerces employers into doing things. Uncle Sam basically digs his hand into your pocket and then puts what he grabs into someone else’s pocket. And of course, Uncle Sam gets more tax revenue from the money he’s redistributing between pockets. Furthermore, the government creates no real value in federal minimum wage legislation. They simply enact a rule on a whim, yet the burden of executing that whim falls totally in the hands of employers who have no recourse in the matter. That isn’t capitalism or the American way—that’s dictatorship. 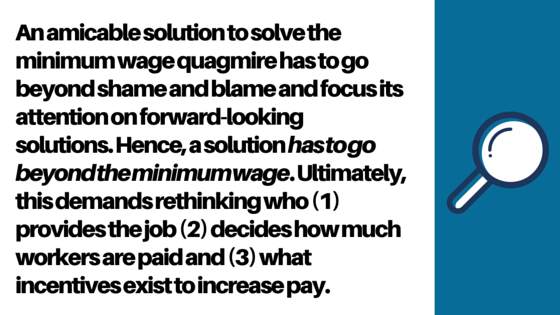 I’m not an economist, but here’s a crazy idea using the all-powerful tool of voluntary persuasion: the current federal minimum wage floor stays the same, but for all employers who have greater than a certain number of employees, they are granted a federal tax credit (not a tax deduction) for any raises granted to all the employees that currently make minimum wage. Of course, the rule would be voluntary, but employers would now have an economic incentive to pay people more money. Resultantly, people get paid more and the government gets paid less. Now, employers willingly and voluntarily give a pay raise that they deem just to their own productive employees whom they know and Uncle Sam keeps his greedy little hands out of everyone’s pockets. Pay goes up, business owners get to run their own businesses, and the government takes a back seat while everyday Americans get to work and make money. That sounds more like the American way to me.