The world is filled with bad news. There seems to be an endless supply of malice, and the expression of evil appears to be getting more and more diverse. Take, as examples, the leveraging of xenophobia and bigotry in an attempt to win an American presidential election, the deteriorating race relations in the United States, the recent terror attacks in Brussels, drone strikes, and the rise of ISIS in the Middle East. The proliferation of tragic realities does not, in fact, represent a progression of evil but rather intensifying manifestations of the same, simple phenomenon. This phenomenon transcends these examples and cuts across time, geography, race, ethnicity, and gender. This phenomenon is dehumanization. 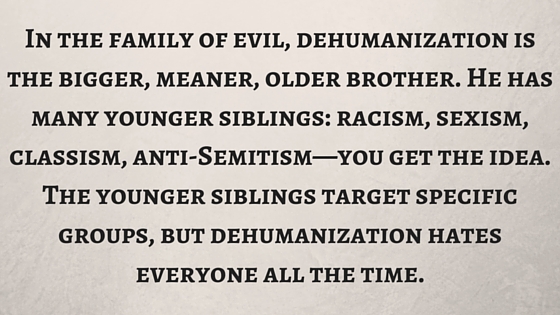 Dehumanization is a bully, so, of course, other bullies tend to gravitate toward him. This helps explain why those with coercive power are more and more biased toward using dehumanization: because of social proof. That is, everyone else is doing it so it must be ok. These bullies often hide behind the veil of the law, which protects them from the consequences of their atrocities. Accordingly, when it comes to ethics, those equipped to be guardians of the common order, law, justice, and freedom have more responsibility and accountability because precious human life is at stake. Power without responsibility quickly dissolves into tyranny, and tyranny is infatuated with dehumanization.

Dehumanization says that some people are less than people, therefore bad things can happen to them because they don’t matter.

This is a paradigm that is as old as humanity itself. Within each epoch, the methods change, but the underlying principle remains the same. The Jews did it to the Samaritans in the time of Jesus, slave traders have done it to slaves throughout history, the Nazis did it to the Jews, white America does it to black America, the black church does it to homosexuals, atheists do it to believers, believers do it to atheists, neocons do it to Muslims, ISIS does it to “infidels,” men consistently do it to women, and the police are doing it to unarmed citizens.

Dehumanization says, “They are less than me, therefore, what they do isn’t human.”

Dehumanization provides complete freedom for apathy and indifference and no room for mercy, kindness, or understanding.

Because they are not human, and I am, the protection of my life and my interests are all that matters. It doesn’t matter if I am using evil to fight evil or weaponizing death against people who would have rather gone about their business peacefully. They just don’t matter, and I do.

Dehumanization is the end result of a much larger human syndrome. This syndrome insists that violence can destroy violence and hatred can quench the fires of hatred. The only problem with this ideology is that it never works. History tells us this. Any act of evil begets injustice, which begets blowback and thus more evil. The solution? Love your neighbor, and act as if they really do matter. Act as if every person on the face of the planet has been formed in the image of God. Evil cannot be overcome with evil. It can only be overcome with good. And good, admittedly, may have to suffer many injustices in order to persevere until the end.