Does moral capitalism exist or does morality insult the concept of the free market?

To me, it seems two words have won the war of dominance in the press since the start of 2014—populism and equality. According to the New Oxford American Dictionary, populism means “a member or adherent of a political party seeking to represent the interests of ordinary people; a person who holds, or who is concerned with, the views of ordinary people.” Hence, populism and equality tend to go hand in hand since in the pursuit of the latter, one tends to frame his motivation “for the common good.”

Generally speaking, equality is a wonderful thing. All persons being created equal, all humans having equal access to inalienable rights, and equal treatment under the law are standard beliefs that are embraced in an open and free society. However, the same concept can also represent a significant ambiguity, since its ends can be framed, molded, and contorted in a number of ways to suit its user. For example, egalitarianism can be abstracted on the left to favor social equality at the expense of economic equality or abstracted on the right to favor economic equality at the expense of social equality.

The bait and switch happens when equality is really a code for an ulterior motive; in most cases, the real goal is redistribution, but that term is caustic and politically venomous. Equality sounds much nicer and enables its user to label himself a populist.

If you fight for social equality, you’re proudly touted as one who fights for women and minorities, even if your actions require redistribution of economic resources.

If you fight for economic equality, you’re proudly touted as one who fights to ensure fairness, even if this requires those who have very little to relinquish whatever diminutive sums they do have.

When one thinks about the concept of inequality, it is also important to consider how the discrepancies originated. I have divided inequality into three categories: initial conditions, process, and end result. The initial conditions refer to how a person begins on the journey of life; in these circumstances, an individual has the least control, and thus, this stage is the most vague and distant. For example, a child being born into poverty compared with a child being born into affluence establishes initially unequal conditions. In the political arena, access or rights would substitute for initial conditions. The process refers to effort, or the means by which something is produced. Last year, the Baltimore Ravens won the Super Bowl. They followed the same rules and were penalized the same way as everyone else and gained six points for every touchdown. The process (playing the games and following the rules) remained the same for all 32 teams in the NFL, yet the end result was different for each one. The end result was thus unequal, but this does not suggest “unfairness” or that some injustice has been done; the Ravens simply excelled above the other teams. Hence, looking at just the end results is meaningless unless we analyze the process as well. If the Ravens cheated in some way, then we have a valid problem that warrants correction.

All these differentiations are essential because a comprehensive analysis of the process of inequality will force the rational mind to reconsider the idea of “inequality” in the first place. No one has control over to whom they are born, but assuming there are equitable conditions in the process, one should expect divergent end results just as one would expect different finishing times if ten people were randomly selected to sprint along the same track. Modern America has molded our minds into thinking that divergent end results are inherently evil, leading to an expectation of sameness without considering the process, encouraging a sense of entitlement, and penalizing those on one extreme while inadvertently incentivizing those on another.

Comparison is the enemy of contentment. As a result, jealousy, envy, resentment, spite, and covetousness mixed with the modern concept of democracy equals inequality. In previous millennia, envy has equaled envy, and it would be left at that without any manipulation. Now, by giving envy a new palatable name, society has fashioned a weapon globally aimed at those at the top of the pyramid without first taking other factors into consideration.

On the other side of the coin, fixing all the end results would eliminate all inequality, but then, you would be living under a communist regime. The most disturbing thought that follows is considering who gets to decide the benchmark of equality and the process by which they will enact their judgment.

Notably, egalitarianism has risen not without cause. Since the 1800s, the world in general has become less equal, or global income inequality has increased. Despite this fact, there are less people in poverty today than there were in the past—this apparent paradox exists because everyone is making more money, thus lifting the poorest up, despite that fact that those at the top proportionately take more home. 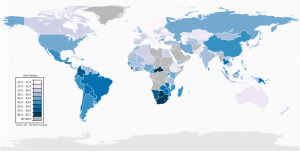 In the past 25 years, more people have escaped from the grips of poverty than in any other period in history. In the past 30 years, the income (uncorrected) of poorest quintile of Americans has nearly doubled, far outpacing the gains of similar cohorts across the globe. At the same time in the United States, differences in overall happiness are smaller compared to differences in wealth. Does this mean that everyone in the bottom quintile should remain content with his or her earnings? Of course not. Does this mean that since those in the bottom quintile are “doing so well,” they should not receive any form of benefits? No. What this means is that economically speaking, inequality in and of itself does not necessarily entail an adverse set of circumstances for those at the bottom. It must be analyzed in the context of overall wealth, quality of living, and happiness. If I was stuck in the lowest quintile and made $125,000 a year but lived in a very “unequal” society, would that be so bad?

Politicians never push to the forefront an issue that is the most pertinent to their constituents or is a legitimate societal need. They only choose those issues that they have the power to actually control. Ironically, with planning and the “correction” of inequalities, the powers that be will subsequently create a different form of inequality, in the form of power. This deceptive conquest takes away autonomy from everyone and places it in the hands of those who yield merit and injustice as a yardstick for the distribution of resources.

A free and liberated society by its nature will yield divergent results for different people. This paradigm doesn’t suggest malevolence; it simply means that some will excel more than others in certain things. Is that “fair”? Well, as long as one person’s progress doesn’t coercively run over you, then yes. Equality may seem attractive in the short term, but once we all realize that this will actually eliminate the progress of those who aim to go above and beyond for the benefit of us all, that scenario certainly is disturbing (no Da Vincis or Einsteins). Just imagine what the world would look like without the innovators, risk takers, freethinkers, limit pushers, and daredevils.

I personally believe in a market economy, but I also believe that when left totally free and uninhibited, this system will lead to disastrous results. This does not suggest central control but rather an ethical framework to guide it—in short, moral capitalism. While entities such as private property, the free market, and voluntary exchange are important, they are not inherently sacrosanct and must serve a higher purpose. The dedication to a moral framework that values interpersonal relations and just treatment of others as much as the free market is the only way to guarantee that in a liberated economic system, the powerful do not in fact prey on the weak. Capitalism is devoid of morality, and therein lies its cardinal sin. Accordingly, capitalism and the market remain so attractive to so many because these two systems absolve its disciples of any responsibility for others. After all, if I knowingly sell you a toxic mortgage, defective car, and/or contaminated food; charge you ten times what a product is actually worth; entice children to sex work; or purposely pay you less than your labor warrants simply because I can, and because the market allows it, it only erroneously elevates a distant and impersonal man-made creation to the status of an infallible deity. Complete and total loyalty to the market will inevitably lead to indifference, immorality, corruption, licentiousness, greed, wickedness, and the gradual destruction of society.

As Jeffrey Sachs summates in his book The End of Poverty, many opportunities exist for those who get on the ladder of the free market, and this enables many to uplift themselves. But there are many who can’t get on the ladder at all, and the “almighty” market has no viable solutions for this group.

True freedom means being free to both succeed and fail. To try and prevent, or correct, either outcome causes the entire system to self-destruct to the detriment of us all.