Home › Opinion › MONARCHY, THE POLITICAL SYSTEM OF GOD: ON THE CREATION ORDINANCES, THE FAMILY & CIVIL GOVERNMENT

MONARCHY, THE POLITICAL SYSTEM OF GOD: ON THE CREATION ORDINANCES, THE FAMILY & CIVIL GOVERNMENT 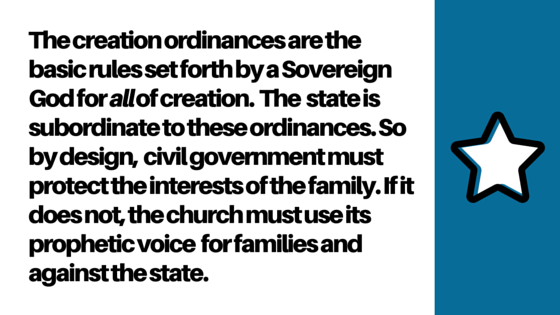 In His sovereign will, the political system that God chose to rule His kingdom is monarchy. In a land of “freedom” and “liberty,” submission to a monarch runs counter to the rugged individualism that is so innately American. Yet ultimately what matters most is not the type of political system but who runs that system.

Before one can ascertain the merits of a particular political system or a type of civil government, the first question that must be asked is what is the prescribed central purpose of that government according to the Bible? The answer is quite simple: to protect the interests of the family. Some clarification is in order.

All of humanity is in a covenant with God. So, even if you have never read the Bible or walked into a church, you’re still in a covenantal relationship with God. This relationship began with Adam, the first man, way back in the beginning, as described in the Bible’s first book, Genesis (see 1:26-30). Adam is a representative of humanity, so when God instituted the creation ordinances, He “made a deal” with all humans for all time. As it pertains to the topic at hand, there are two creation ordinances that are distinctly applicable: the sanctity of life and marriage.[1] God blessed Adam and Eve and then instructed them to be “fruitful and multiply.” Clearly, the proliferation of human life is an extension of God’s blessing. The Declaration of Independence reflects the sanctity of life when it says that individuals “are endowed by their Creator with certain unalienable Rights, that among these are Life, Liberty and the pursuit of Happiness.” In other words, there is an external, divine Law that is written onto our hearts and into natural law, which is woven into the fabric of creation.

Furthermore, God declared that it was not good for Adam to be alone (Genesis 2:18), and so He made Eve from Adam’s rib. Because of this, “a man shall leave his father and his mother, and be joined to his wife; and they shall become one flesh” (Genesis 2:24).

Indeed, these ordinances do not apply to the salvation of individuals, and this does not nullify the covenant with non-believers. Because these ordinances are written on the hearts and consciences of all people, human beings everywhere have a deep, internal moral sense that killing another person is wrong. This moral law exists regardless of time or place, even if you live in a modern Western city in the 21st century or if you lived in the remote jungles of Sub-Saharan Africa in the year 200. People also have an innate tendency to find someone, get married, and have children. This is a human trait that transcends time, culture, ethnicity, nationality, and race. If you throw a bunch of single men and single women in a room, what happens? They start becoming “joined” together. The reason why this happens isn’t due to the spontaneous effect of happenstance. It is the result of a creation ordinance.

Resultantly, the creation ordinances transcend the limits of subsequent laws—this includes rules of political systems, laws of civil government, and rules of the church. This helps to explain why even if you are a staunch pro-state atheist and ignore all of God’s commands, the sanctity of life and marriage still remain.

The purpose, then, of any type of political system is to protect the interests of the family.

Look at the Biblical narrative. The first introduction that we have to civil government (Exodus 1) is the tyrannical and abusive regime of the Egyptians. At the time, Egypt was the most powerful nation on the planet. They were “strong,” “powerful,” and “#1.” The Egyptians spat in the face of God’s creation ordinances and violated the sanctity of life and the family—Hebrew babies were ordered to be killed in Exodus 1:15-16. God subsequently cast judgment on the Egyptians with ten plagues that executed justice using creation (environmental disasters) and the taking of life (in the last plague, firstborn sons died). The Egyptians had a wonderful political system that worked for the Egyptians, but it didn’t work for God.

Next, when God began to give His Law to the nation of Israel (Exodus 20:1-17), no formal civil government existed. What did exist were hundreds of thousands of people whose primary social unit was the family. The rules and regulations given to the people prescribed how to obey God and treat one’s neighbor. Elders existed who settled disputes between individuals, but the primary locus of social control and organization was the family. In other words, when God laid the foundation for a society of His chosen people, what was important was His Law, not a particular political system or type of government. Here, families were protected by the head of the family, and all Israelites had an identity as people who lived under the Rule of God.

Even after the Israelites entered into the Promised Land (modern-day Israel), no form of civil government existed for a time. The Book of Judges (2:11-15) tells us that once Israel arrived where they needed to be, they began to depart from God’s Law and suffered adverse consequences.

The point here is that even though the family transcends government, the absence of formal government is not an acceptable alternative to some form of government if people continue to violate God’s creation ordinances.

Here, in the closest Biblical depiction of anarchy, “there was no king in Israel,” and so “every man did what was right in his own eyes” (Judges 17:6). In this circumstance, morality was not legislated and there was no protection of families. Generally speaking, the results were adverse.

Consequently, when one contemplates the protection of the family as a crucial aim of a political system, it is not a matter of if morality should be legislated. It is a matter of what morality should be legislated, because if a political system fails families, then that system fails. In order to ensure the viability of society, we have to ensure that the cornerstone of that society—the family—is protected.

This applies to believers and non-believers alike. To do otherwise violates God’s creation ordinances. To do otherwise allows everyone to do what is right in their own eyes. To do otherwise means violating the divine law that has been written on our hearts. Consider a political system where morality is not legislated. That would be a society consumed by abominable wretchedness, where the Law of God is rejected and separation from God is irrevocable. Essentially, that society is called hell.

God’s chosen political system is a theocratic monarchy ruled by the King of Kings and the Lord of Lords (see Isaiah 9:6; Zechariah 14:9; Colossians 1:15-17; Hebrews 1:8; Revelation 19:16). In this divine monarchy, because the Ruler is God, all of God’s ordinances are obeyed fully. It is a political system with One Supreme Ruler. There is no voting, no representative democracy, and everyone there has no recourse because they all recognize that they exist in that kingdom but only by the grace of God. In order to stay in the kingdom, one would have to follow the laws set by God rather than making one’s own laws. There are no political options, but the lack of choice is what makes the monarchy of God so appealing. If one did have a choice (as we do today), then we are free to not choose God. In God’s kingdom, I am not free to do what is right in my own eyes, and that is a freedom I will gladly yield to be in continual fellowship with The Lord. In the monarchy of God, the adopted sons and daughters in God’s family will fulfill the creation ordinances, and they possess the understanding that this fulfillment is only possible when serving the King of Kings.

[1] And for a brief summary of all of the creation ordinances, refer to http://www.ligonier.org/learn/devotionals/creation-ordinances