THE CRUSADE AGAINST ISIS

While reading the New York Times the other day, I came across a very disturbing advertisement written by the Catholic League for Religious and Civil Rights (click for greater clarity): 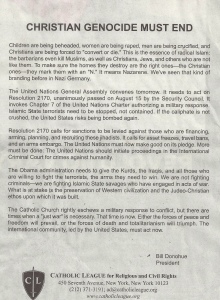 Ironically, a faith-based organization is calling for a “just war” against “barbarians” and “savages,” invoking the Judeo-Christian ethos in order to preserve Western civilization. Quite frankly, such language and tone sounds like the Crusades all over again, in an effort to stomp out all traces of the morally detestable “infidels” from the face of the earth. Now, the search for the Holy Grail isn’t an issue, yet the expected means remain the same—using evil to fight evil and violence with violence in order to bring back decency and peace. Where the evil ends and the good begins remains unclear.

With the drums of war now beating again in Iraq, I will assume momentarily that all of my readers lack short-term memory. The age-old formula of “severe threat demands immediate action to preserve way of life” was used in Iraq (and then Afghanistan) over a decade ago, a plan predicated on a threat that did not in fact exist, and our intervention only created more problems than what already existed. We initiated a flawed and expensive plan arrogantly thinking that our prescriptions were the best medicine for their problem. The same flawed logic is being used again, and I fear that the results will be exponentially more disastrous.

The first flaw in foreign intervention is a philosophical one. In Murray Rothbard’s For a New Liberty: The Libertarian Manifesto, the author makes the libertarian case for foreign nonintervention through isolationism.

Mr. Rothbard notes that the most favorable multinational foreign policy is one that shuns foreign intervention. That is, intervention promotes hegemony through war, money, influence, and politics, whereas isolationism preserves nations as they are and encourages local and/or regional conflicts to be solved locally or regionally. He finalizes his arguments by saying, “[T]he primary plank of a libertarian foreign policy program for America must be to call upon the United States to abandon its policy of global interventionism: to withdraw immediately and completely, militarily and politically, from Asia, Europe, Latin America, the Middle East, from everywhere.”

The second flaw in waging war against ISIS (Islamic State of Iraq and al-Sham) is an error in moral analysis. Certainly, ISIS is not innocent, and I am in no way suggesting that they have not, in fact, committed several moral atrocities. If, however, one were to place the evil label on them, we automatically assign a moral judgment, rendering them guilty and, therefore, worthy of just punishment—a punishment that is subsequently determined and executed by the Western collation of nations who seek to use the same violent means as the entity they have condemned. Throughout the entire exercise, there is no consideration as to why ISIS exists, what are their motivations, and how they grew from a handful of extremists to an army of tens of thousands now. If such questions are not answered, then going in with guns blazing does so blindly, full of confidence yet also full of ignorance.

Third, to conclude that ISIS simply represents “bad guys gone crazy” dismisses the American hands that have helped shape the current movement. Back in 2007, Seymour Hersh wrote a story for The New Yorker where he described the Bush administration policy of “Redirection.” Under this policy, Saudi Arabia cooperated with the United States in order to boost Sunni radicals as a means of inhibition of the then-growing Shiite power grab in Iraq as a result of American backing and “nation-building.” Mr. Hersh said, “The Administration has cooperated with Saudi Arabia’s government, which is Sunni, in clandestine operations that are intended to weaken Hezbollah, the Shiite organization that is backed by Iran. The U.S. has also taken part in clandestine operations aimed at Iran and its ally Syria. A by-product of these activities has been the bolstering of Sunni extremist groups that espouse a militant vision of Islam and are hostile to America and sympathetic to Al Qaeda.” The italics are mine, but in other words, the first invasion of Iraq and America’s deliberate secret operations at the time set the stage for ISIS and thus the second invasion of Iraq. In short, America helped to birth ISIS. I highly recommend the article as it goes into much greater detail into the clandestine multinational schemes that were executed to get us where we are now.

And by the way, the current head of ISIS, Abu Bakr al-Baghdadi, spent five years in a U.S. detention facility. His fervor and hate was not spontaneously spawned; it was created by foreign intervention. The New York Times reported that “at every turn, Baghdadi’s rise has been shaped by the United States’ involvement in Iraq . . . The American invasion presented Baghdadi and his allies with a ready-made enemy and recruiting draw. And the American ouster of Saddam Hussein, whose brutal dictatorship had kept a lid on extremist Islamist movements, gave Baghdadi the freedom for his radical views to flourish.” Accordingly, even if we did round up all the bad guys and bombed them into oblivion, that act in and of itself will create an even greater number of bad guys.

Fourth, the war proponents must take a class in humility in order to fully grasp the idea that the future is not certain. Accordingly, we thought we could “win” (whatever that meant) in 2003, but we didn’t. In the end, we lost miserably with trillions spent, over 4,000 American lives lost, and more problems than we started with. Why would any rational person, then, think doing the same thing would yield different results?

Fifth, ISIS, just like WMDs, poses no threat to the American homeland. (ISIS does, however, pose a regional threat.) That, in fact, is not my opinion, but the opinion of Homeland Security and the FBI as reported in The Daily Beast. So while ISIS may have 30,000 (high estimate) men in its ground troops, they won’t be crossing over the border anytime soon. And if we use President Obama’s definition of stated goal of victory as “ultimately destroying” ISIS, then we ought to prepare to be engaged in war forever because there is no scenario where every last member of ISIS—both present and future—can be exterminated.

In the end, I think everyone ought not to react to the crisis in the Middle East but to respond. Reacting is a reflexive means of action that does not take time to first consider what is going on and, subsequently, then ask what the most appropriate course of action is. Responding does take these factors into consideration and evaluates the current crisis in the Middle East as multifactorial and caused by many forces that are purposely being ignored.

Generally speaking, war is a bad idea, but there are some instances where the use of force is the only means to stop evil.

Finally, a theology of the cross recognizes the evil that others are doing, and knowing that those who seek to do you harm will never listen to what you have to say; Christ still offered Himself as a sacrifice for them anyway. It was a voluntary, willing sacrifice on behalf of God-incarnate for the sake of humankind, essentially the self for the sake of others. However, the sacrifices being made in regions of Iraq and Syria are not voluntary but coerced upon people who have done no wrong other than practice the religion that they choose, a perilous paradigm reminiscent of Nazi Germany that should never be tolerated. Radicals are killing Christians, Jews, and other Muslims from different sects because of their religious beliefs. This is the true atrocity, a humanitarian crisis that does warrant intervention—in an ideal world first by the church, second by nations in the immediate region, and third by a larger coalition if the second step fails—because if something does not act on behalf of all those who are being slaughtered because of their religious beliefs, who will speak up for the innocent? Who will defend those who are defenseless, and who will seek justice for those victimized by injustice? What will the testimony be of people who could help their neighbor but instead voluntarily choose to let the opportunity pass them by?

3 comments on “THE CRUSADE AGAINST ISIS”